Warning: include(../tag-manager-body.php): failed to open stream: No such file or directory in /var/www/vhosts/h159399.web31.servicehoster.ch/com/htdocs/en/coaching/sociogram.php on line 143

Warning: include(../tag-manager-body.php): failed to open stream: No such file or directory in /var/www/vhosts/h159399.web31.servicehoster.ch/com/htdocs/en/coaching/sociogram.php on line 143

A sociogram is the graphical representation of interpersonal relationships within a constant group. That is, a sociogram depicts how the participants in this group (e.g., in work teams, school classes, seminar groups, etc.) are in relationship with each other. Thus, positive and negative relationships, as well as prevailing sympathies and antipathies between the group members can be visualized and mapped.

A sociogram thus makes structures within this group measurable and is one of the most important presentation methods of sociometry, a method of empirical social research.

Origin / history of the sociogram

The sociogram was developed more than 100 years ago by Jacob Levy Moreno. He used the method while working as a medical doctor in a refugee camp near Vienna in 1916. There were many Tyrolean farmers who had fled from the Italian army. They lived under miserable conditions, due to the tight living quarters, which also created many social hardships. Moreno observed that many of the social problems were caused by conflicts between different nationalities and people with different political attitudes. He advised the government to restructure the camp with the help of sociometric findings and was given permission to do so. As a result, he formed new living and working groups based on mutual sympathy. He then received the results from surveys of the refugees living there. His experiment was successful: although the difficult living conditions remained, the social restructuring improved the worst problems. Later, Moreno used the knowledge gained in America as he changed the group structures in a prison so that the prisoners could personally develop further. Moreno himself describes his "idea of sociometry as a way to rearrange society". In addition to the sociogram, Moreno's work also includes psychodrama and group psychotherapy.

Today, the sociogram has established itself primarily in school classes. It is used by teachers to graphically represent their students' interactions and conflicts, and then to use the knowledge gained in order to guide the group process in the class. In the field of seminars too, a sociogram can help to visualize the group dynamics and the relationships between individuals. Sociograms are used in companies to analyze the relationships between individual departments and areas. This can serve as a basis for company development, for team coaching and - in a modified form - also for individual coaching.

How do I create a sociogram?

In a sociogram, all members of a group are asked to comment on their affection or aversion to other members on an individual basis. This is usually determined by specific questions. All participants are shown on a graph, and the sympathy or antipathy values are drawn with the help of arrows and symbols. The following procedure has proven itself:

1. Determine the people to be involved

In order to take stock and to document the group process in teams or school classes, it makes sense to limit yourself to the existing group. This is also helpful for detecting conflicts, alliances or small groups.

For cross-group projects, however, the number of participants can also be extended to other persons. Here are two examples: For a project of limited duration in a company, a project team is to be formed (for example, organization of a trade fair / development of new customer loyalty strategies, etc.). The members can work across teams, i.e., be composed of various existing teams. Here it makes sense to include all potentially involved persons in the sociogram. This also makes sense for school classes, for example, when a school event is imminent and teams are to be put together across all classes (for example for a raffle, for the organization of competitions, cake sales etc.).

Subsequently, each group / team member is asked questions, for example the following:

The respective questions should be adapted to the group's concerns and formulated accordingly. There is also the option of formulating the questions negatively:

The questions should be clearly formulated so that clear statements of affection or aversion can be made. Negative questions are also to be treated with caution, they can also be left out. The informative value of a single sociogram, which is initially only a snapshot, is less than the significance of several sociograms, which are recreated after some time. Only then can developments within the group be taken into account. (See also criticisms of the sociogram).

For the evaluation, a sociogram template is created in which all persons involved are represented in the form of a circle or oval. They can be arranged in a circle. The results of the questions are indicated by symbols, e.g., represented by arrows. Thus, e.g., different arrow colors and / or different shapes can be used than for a positive and negative choice.

Example of a simple sociogram of six persons.

In the example shown above there is e.g., a mutual affection between the persons A and C, as well as between E and D. Person C also receives sympathy values from three members. There is also a mutual antipathy between C and D. In this snapshot, person D receives the most negative values.

For the evaluation, it is important that conclusions are drawn not only on the basis of the representation. Often, the answer choices are limited in advance (for example, "Which two people would you like to have a personal conversation with?") By doing so, members who would have been favorably selected when the choice is unlimited can be falsely considered unpopular. Further interviews should, therefore, take place afterwards or the interaction of the members should be observed. Of course, a high level of tact is required, so that no marginalization occurs.

For larger groups (for example, school classes), it can be quite time-consuming to do everything by hand. There are now numerous and simple software programs that can be used to create sociograms, some of which are free. A disadvantage is that such programs often do not allow for many possible means for individual evaluation.

A sociogram can obtain information about the relationships between people with special symbols or through the chosen colors. Here are some of Moreno’s suggestions: 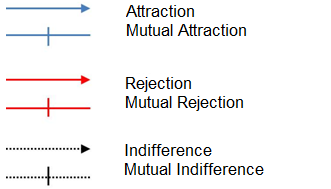 These relationship lines are suggestions. They can be individually created and supplemented as needed. In addition, Moreno suggests including more details in the design of the connecting lines. Thus, e.g., the individual reaction of one person to another group member is determined by the color design of the lines or their patterns. For example, a dotted or dashed line represents "fear" in front of the other person, a thin line indicates "annoyance" and a thick black line "domination" over another.

Moreno specifies here (below) the gender of the person with distinct symbols, as well as different skin color with colors.

This symbolism serves only as a suggestion. Meanwhile, a variety of other meaningful symbols become widely spread. Thus, the relationships can be quickly and clearly marked with emoticons (smiley, frown, heart, social media characters, etc.) at any time. Conflicts, for example, are additionally marked with a lightning bolt or close relationships with a double arrow. Spatial arrangement of the members can make a graphic very meaningful (for example, people who are close are drawn closer together). 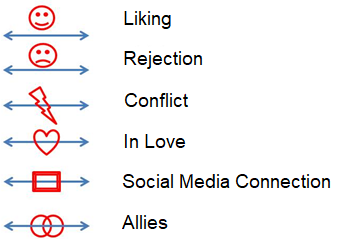 Other forms of sociogram evaluation

Apart from the representation shown above, in which all members are arranged in a circle, other approaches are also available. Thus, the evaluation can also be made according to the rank of the persons involved: the one who has received the most sympathy in the selections is listed on a scale above, persons with little sympathy values correspondingly far below. Alternatively, very popular group members can be displayed centrally, which also illustrates their position within the group graphically.

Ranking: B receives the most sympathy

Person D with the most sympathy values is presented centrally. (Other ratings are not included here.)

Criticisms of the sociogram / basic instructions for use

A sociogram is a snapshot of the group or team situation and should be considered as such. The very next day it could look very different. Even current conflicts or a previous dispute can lead to misinterpretations. This should be taken into account, especially for school classes with their fast-changing friendships and sympathies. The sociogram should therefore always be aligned with the observations made by the coach or teacher. When working in team coaching, it is advisable to conduct additional open interviews in order to obtain information that cannot be covered by the prescribed questions.

A sociogram must under no circumstances be used to marginalize members. Therefore, the question arises, who may see the results? When the sociogram of the group, the team or a supervisor is shown, there is always the danger that individual members will be stigmatized because they may have received less sympathy points at that time. This momentary stocktaking - shown graphically - is quickly evaluated as an irrefutable fact without any additional information. It can lead to the exclusion of group members, or in the worst case, to bullying or mobbing.

Therefore, sociograms should never be used as a one-time sociometric method but should be repeated and adjusted at regular intervals so that they can show a more meaningful result.

First of all, a sociogram is suitable for working with groups, e.g., in a seminar, in instruction or in training. However, as a diagnostic tool of sociometry, the sociogram can also serve as a basis for coaching, team and company development. Their use in individual coaching is quite possible and helpful. In this case, the other individuals are not interviewed. Instead, the client is encouraged to outline his relationship with his colleagues (and colleagues among themselves) from his point of view. This often leads to valuable findings. In contrast to an organizational chart that shows the structures and the hierarchical structure within a company, the sociogram directs one's attention to the relationships between employees.

Example of use in individual coaching

Starting with himself, Mr. K. should outline his relationships with his colleagues and supervisors. For this he arranges himself in the middle and the other employees around him. He also documents relationships between colleagues as far as he can judge them or when they affect him. This sketch serves as the basis for further coaching discussion. 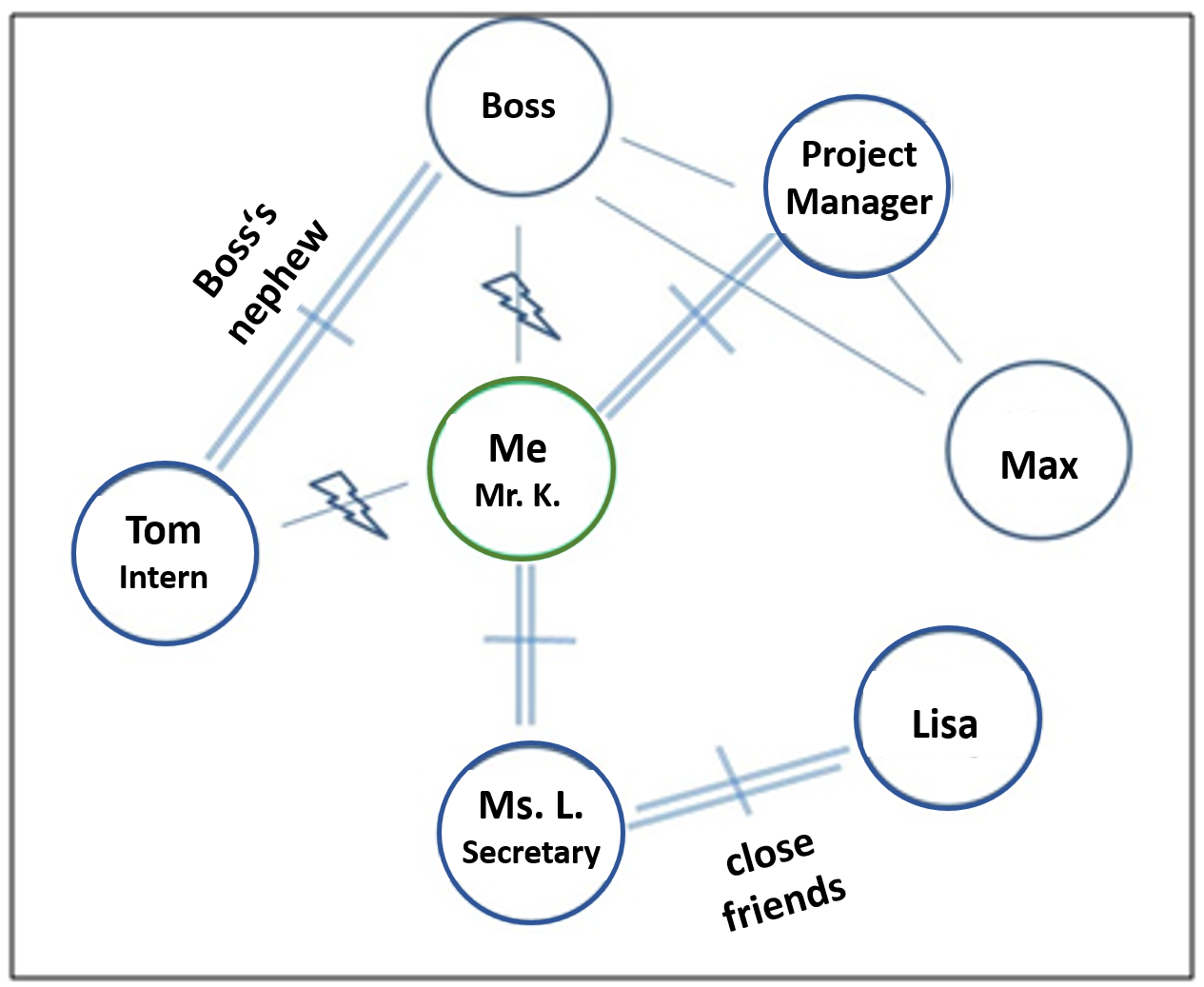 From this sketch it becomes apparent: Mr. K. has a conflict with his boss and with an intern, who is related to the boss. He has a good, mutual relationship with the secretary and the project manager. He has not recorded relationships with the other members.

Again, this diagram represents a snapshot. The sketched conflicts can refer to a current issue that could be quickly resolved. They can also represent an already long-lasting, bad and conflictive relationship.